Welcome to our fourth and last part of the Licorice Story - well at least for this particular history part.

There isn’t only one item that is „the licorice“. A wide variety of Licorice sweets are produced around the world. And a lot of people love a particular kind of licorice, but not the other part. Or People hate licorice at all. But as there are so many varieties it is not to say „ i don’t like licorice“ cause you will never have tried all the different kinds that are out there.


In North America, it is called black licorice to distinguish it from similar sweet varieties that are not flavoured with Licorice extract but manufactured in the form of chewy ropes or tubes. So called "black licorice" is also a widespread flavor in other forms of candy such as jellybeans. In addition to these, various other Licorice-based sweets are sold in the United Kingdom or all over the world, such as „liquorice allsorts“ that contains a lot more parts of sugar confection.

In some parts of licorice candy, the taste is reinforced by aniseed oil so the actual content of licorice is very low. In North America the US Made licorice product variety is very little.

As i said there is a large community, so in Europe you find very different kind and tastes. MyGermanCandy try to bring the best of the best from the old world into the new world.

So lets have a look into some of the differences. It would even go beyond the scope of this article to go on ever single kind of licorice, but I will try to cover most of em.

In the Netherlands for instance licorice candy (they call it: drop) is one of the most popular forms of sweets. They don’t offer a lot of Licorice containing aniseed as a substitute, but mixing it with mint, menthol, or with laurel is quite popular. Also the salty side from bending it with ammonium chloride (salmiak) is also popular. The most popular licorice, known in the Netherlands are zoute drop (salty licorice), actually contains very little salt. The salty taste in most of the Salty Licorice item through the world is due to ammonium chloride. Strong, salty sweets are very, very popular in Nordic or Scandinavian countries.

In Denmark, Finland or Sweden also in the Netherland you will often find double salted Licorice. And again it doesn’t actual contain salt, but ammonium chloride. So someone who had tried a „Salted Licorice“ from the Netherlands or any nordic country and didn’t like it should try a german „Salty Fish“ one, in Germany most „Salty“ Licorice is covered in sugar. That way the anyway less salmiaki licorice is more sweet then „Salty“ and finds more friends. In Denmark and Finnland the Turkish Pepper (not turkish and not made with pepper :-) ) is a licorice hard shell filled with salmiak powder. There is even a licorice liquor made out of the Turkish Pepper.

And there is the Romanic type of licorice. In Spain, Italy or France licorice is popular in its more natural form. The root of the plant is simply dug up, washed, dried, and chewed as a mouth freshener. Throughout Italy, unsweetened licorice is consumed in the form of small black pieces made only from 100% pure licorice extract; the taste is bitter and intense. In Calabria a popular liqueur is made from pure licorice extract.

Licorice is also very popular in Syria and Egypt, where it is sold as a drink, in shops as well as with street vendors.

And there of course is red licorice which is extruded in a way to resemble licorice strings but made with main flavorings other than licorice, such as cherry, raspberry, strawberry or -of course in the US- cinnamon. More recently similar products have been introduced in a wider variety of colours and flavours including apple, mango, blackcurrant, and watermelon, among others. Twizzlers (by Hersheys) and Red Vines are the best-known product brands of this type in the United States. While the common name for this candy has now become "red liquorice“ or often simply "liquorice", it does not have the taste of licorice. "Black" in "black licorice" would formerly have been redundant and has become a retronym in North America.

Licorice is also being used by brewers to flavour and colour porter classes of beers, and the enzymes in the root also stabilize the foam heads produced by beers brewed with it. So you see Licorice is more then just a candy. And we offer you a great selection to taste all the different type of licorice. But don’t you forget: we also have all kinds of german or european candy and a lot more of european goodies.

So if you like our short excursion into the world of licorice, just let us know. And please also tell us what would be of interest for you that we should write about! Just send all you want to contact@myGermanCandy.com - we are here to listen! 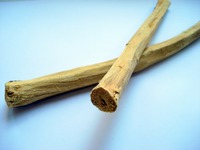 But what goes in a normal Licorice candy? Today licorice is a confection flavored with the extract of the roots of the Licorice plant. It is usually made out of the following ingredients: sugar, starch, glucose syrup, gelling agent, licorice extract, flour, salt, according to taste and ammonium chloride, flavorings, glazing agent: anise oil or [...]

Welcome to the second part of our short story of licorice...Todays knowledge confirms that Licorice has a calming effect on throat and the stomach. But there also is a warning, as with all medicine products (nature or manmade) there are side effects when you not use it probably: glycyrrhizin, the active ingredient of licorice, stimulates the circulation of the [...]

In this small series I will try to get some light behind the history of the „black eatable gold“ of licorice.Wikipedia says the word licorice is derived (via the Old French licoresse) from a Greek word (glukurrhiza) and meaning "sweet root“. It is usually spelled liquorice in British usage, but licorice in the United States and Canada.Licorice is used and [...]