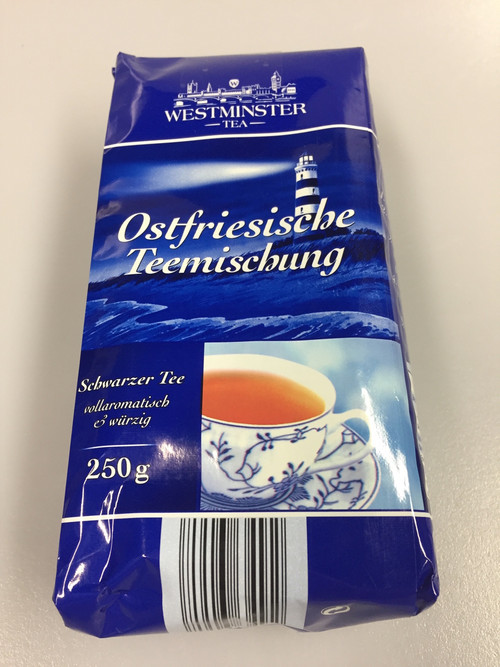 The Ostfriesentee is a special, strong tea blend of East Frisia Germany. It can consists of up to ten types of black tea, mainly from Assam. But even tea from Ceylon and Africa, as well as Java, Sumatra and Darjeelingsorten be mixed thereto.

In East Frisia, tea is consumed three to four times per day. In addition to breakfast and dinner, one morning tea time is held at around 11 a.m. and one mostly at 3 p.m. It is said to set that three cups of tea per sitting are adequate.

Making tea the East Frisian way is a ritual but not at all difficult. You drink your tea out of small china or mostly out of a special tearless. The tea time  (here called “Teetied”) is prepared by placing one teaspoon of tea leaves for each glass/cup and one extra for the pot in the bottom of a pre-heated (just put hot water in the empty pot and let it sit for two minutes - then empty the pot) teapot. After having the Tea in the pot water just off the boil is poured over the tea leaves to cover. This is allowed to steep for three minutes (tea is invigorating) or five minutes and the later day cause it is said it calmed you down and help you sleep, then the pot is filled with very hot water and the tea is served.

In each glass or tea cup, "Kluntjes" or “Kandies” are placed and the hot tea is poured through a small strainer over the sugar rocks filling to half. Often, a special spoon for the cream, called a "Rohmlepel" is used to carefully add a bit of cream to the side of the cup so that a white cloud in the middle of the black tea is seen. Traditionally, the tea is drunk without stirring.

As a guest, it is considered rude to drink fewer than three cups of tea at a tea time or sit in. Placing your cup upside down on the saucer or your spoon in the cup signals that you are finished and want no more tea.