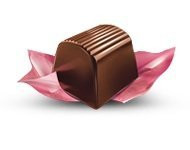 The Mon Cheri is a single-wrapped combination, consisting of a "heart" of cherry, floating in a special liqueur and contained in a plain chocolate housing. Each Mon Cheri contains 46 calories and is packaged in a red/pink wrapper. There is no disclaimer on the packaging denoting the liqueur center, and unsuspecting tasters expecting a sweet treat may be in for an unfavorable surprise. Mon Cheri actually comes from French and means "My darling". Mon Cheri is produced since 1960 and first introduced to French, Belgian and UK markets and a year later to the German market. The cherries used to make Mon Cheri have their origin near Fundao, in Cova da Beira rural area, Centro Region, Portugal. Every year Ferrero buys 150,000 tons of fruit to produce this candy. Mon Cheri was the first major product with which the company's German subsidiary in Stadtallendorf became successful after its start in 1956. n the American market, Mon Cheri was actually filled with hazelnuts and did not contain liqueur, similar to the Ferrero Kuesschen that is sold in Germany. After more than 20 years in production, this variety was discontinued by Ferrero, except in Puerto Rico where it is imported from Germany as "Mon Cheri". A juicy Piemont cherry, floating in luscious brandy and hidden away in a delicate shell of rich, dark chocolate (some Information c by wikipedia) For Adults Only! Contains small amount of alcohol. Must be 21 years of age or older to purchase this product!