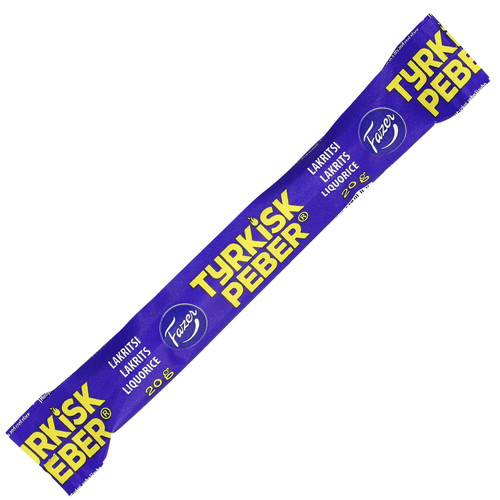 Tyrkisk Peber (Danish for Turkish Pepper, often referred to as Turkinpippuri in Finland, Tyrkisk pepper in Norway, Turkish peppar in Sweden, and Tuerkisch Pfeffer in Germany) is an original a strong licorice candy flavored with ammonium chloride (salmiakki / licorice).

Its version is a large soft stick, licorice outside, and a sweet confect filling. In the end, it has a slightly hot kick. For fans of original salty, spicy and sweet licorice - this is a different taste than your regular licorice. Try it, you see if you like it. For fans of the original just a personal note from MyGermanCandy-man "if you live the hard candy Danke Pepper or Turkish pepper, do not compare this stick to them. It's different than the hard candy even when it has the same family name. I like it as well, but I wouldn't call it Tyrkisk Peber"