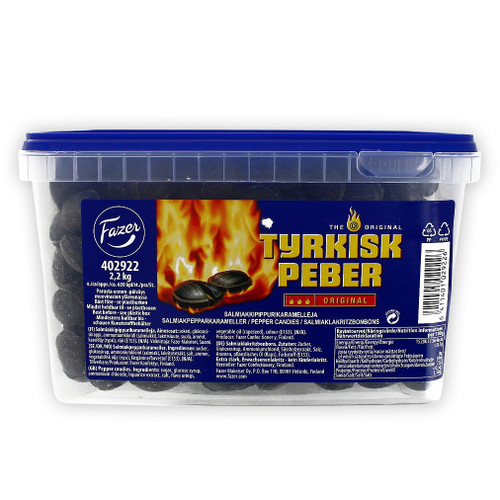 Its a large, hollow round shell filled with licorice powder. For strong taste buds.

Fazer Tyrkisk Peber combines the flavor of a spicy licorice candy with an extra-spicy filling. Because at the core of these candies is "peppered" salmiac powder that has it all. Licorice lovers will get their money's worth with these extraordinary delicacies. The Licorice Sharpening Scale by Fazer rates Tyrkisk Peer Original with 3 out of 3 flames.

* contains no pepper or chili.

Our own Dansk / Turkish Pepper is very similar to this mostly called "original" Tyrkisk Pepper, we add also real licorice powder to the outside - we "dust" them. The Fazer Tyrkisk are only filled from the inside. But some say these are stronger than ours. So make up your mind and compare, if you like!