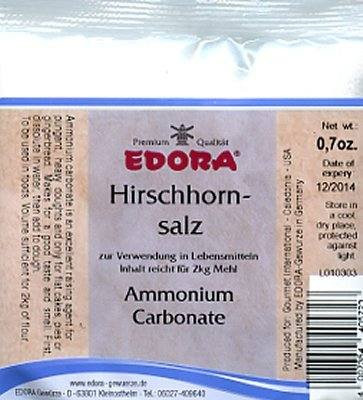 When heated, all components decompose into carbon dioxide, ammonia and partly water. In pure form, this salt is also referred to as ABC shoot, which is derived from the chemical name of the main component ammonium bicarbonate. It is also known as "volatile tepid salt". designated. Hirschhornsalz is used to loosen flat pastries, such. As shortcrust pastry, specula, Springerle, Americans, stag cake or for gingerbread. It is particularly suitable for rye dough because of good swelling and baking properties (loosening, large volume and elasticity of the dough). It also creates the typical spicy taste. It drives the dough, especially in the width and less in the air. The acid protects the dough from foreign fermentation and prevents the colonization of mold fungi. That's why sourdough pastries last a long time. Hirschhornsalz is not suitable for so-called biscuits (eg high cake), because ammonia would be retained, which may affect taste and color. Flat cake can be prepared, it is very durable. Hirschhornsalt is harmful to health if eaten directly. By heating, the ammonia is largely expelled. Hirschhornsalz differs from baking soda due to the lack of acidic ingredients. Hirschhornsalz should be kept cool and dry and separated (or well sealed) from other baking ingredients (for example, vanillin sugar), otherwise there is an impairment caused by released ammonia. The salt smells faintly of ammonia and tastes similar to sal ammoniac.
Note: When using Hirschhornsalz, the formation of acrylamide is particularly favored.