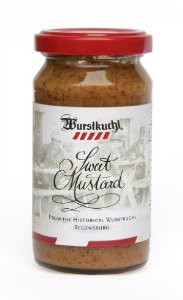 ## Update June 2020: Germany is getting back on track and new Mustard is cooking in the Wurstkuchl for you already! That's good news. But the Airline & transport industry is not. With shipment costs right now three times higher than before the CoVid-19 crisis, we have to wait for better rates. We don't want the mustard, or any other product being raised at prices. It would be another punishment for our customers after this all. So we will wait and hope for it to get reasonable soon. (For example, if we would pay the asked prices now, we would have to almost double the price for a single jar! This will not be happening, we might not be able to avoid a slight increase but we try hard to make it not a big jump. Until we have new incoming we will still limit the order size, and are not able to offer a 12 jar tray at this time! ##

With our 12 Jar Package you enjoy them all season long or for just one Oktoberfest Session: Bratwursts without the traditional sweet mustard would only behalf as enjoyable, as we all know.

And because it is particularly important to the guys at Wurtkuchl in Regensburg, germany, to give their hand and homemade mustard that unmistakable special character, they still produce it themselves today the recipe has been passed down by Elsa Schricker in late 18th.

The original Recipe is a keep secret between the guys that makes it daily and the owners. And yes until today you can still buy it at the oldest sausage tavern in the world, or for the first time outside europe here direct in our online store.

We ship it all over america! Originally the historical Wurstkuchl was a small building attached to the city wall which during the construction of the Old Stone Bridge between 1135 and 1146 was used as a building office. Once the bridge was finished ? in those days celebrated as the eighth wonder of the world? the office was closed and the small building became the "Garküche auf dem Kranchen", a kitchen providing slow-simmered meals for crane workers. The kitchenÂ´s customers were dockers and builders hence the name "Kranchen" a former word for crane. There were plenty of dockers in those days as the wealthy tra-ding patricians of the free city of Regensburg used the port intensively for centuries as place of transshipment for goods from all over the world. The hungry workers however mainly came from the building site of the Regensburg cathedral. Exactly when the simmered meat in the "Garküche" was indeed replaced by finer sausages is not known. It is assumed that they were introduced by the pro-prietor Wolfgang Miezam towards the end of the 18th century.