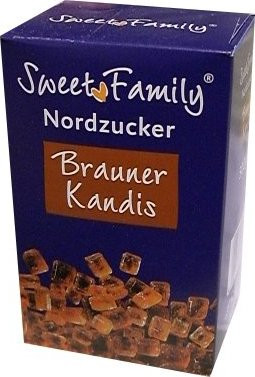 Kandis Sugar - the Arabs had this kind of sugar already in the 9th century. Kandis was still produced 100 years ago by first crystallizing the "purified, but not heavily cooked-up sugar juice in copper vessels (Potten), which were traversed by twisting threads, first in a cool place, then a few days in the" Darrstube "(Brockhaus, 1865) Today Kandis is produced industrially from highly concentrated sugar solution in large crystallization containers. The sugar solution constantly flows around the resulting sugar crystals. These then grow to a size of about four millimeters in five days. After two to three weeks, the crystals reach a size of 18 to 24 millimeters and then come as Würfelkandis (Kluntje) in the market.Brown Kandis is made from a caramelized sugar solution which brings him his unique caramel note.Kandis is used for sweetening tea and other hot drinks and has great importance in Germanies East Frisian tea culture.

Store in a dry place.